If you are just browsing or short of time right now, please just read the bold text OR look at the pictures showing native oyster growth stages AND sign up to our newsletter!

Whether you enjoy eating oysters or whether you just want cleaner seas and a diverse marine ecosystem, by supporting this project you will help oysters that are a backbone species in marine habitats and encourage many other plant and animal species to flourish.

EVEN THE SMALLEST DONATION WILL MAKE A REAL DIFFERENCE TO THE SURVIVAL OF THIS SPECIES, JUST £1 WILL SAVE ONE ESTER - A CORNISH NATIVE OYSTER!

WHAT IS THE PROJECT?WE AIM TO HATCH AND RELEASE 1,000,000 CORNISH NATIVE OYSTERS IN TO THE FAL ESTUARY, CROWDFUNDING IS THE ONLY WAY WE CAN KICK START THIS PROJECT IN 2020

Overfishing, pollution and disease has wiped out 85-95% of the worlds Native Oyster population in the past 2 decades alone.

It goes without saying that there is “No Planet B!” it has taken thousands and thousands of years for the Oyster to acclimatise and to be crowned as one of the longest serving edible seafoods. There is evidence primates have been using stone tools to eat shellfish for millennia.

Scientific research and screening can eliminate the spread of disease, sustainable local aquaculture can reduce the pressures of overfishing the juvenile wild stocks before they have had chance to reproduce and cooperative management can put a stop to pollution of our estuaries and seas.

Our plan is to save large disease resilient Cornish Native Oysters and put them through a controlled hatchery program, so we can study the growth patterns of larvae & spat (baby oysters), then they will go through natural seawater settling and holding tanks, as well as upwellers and silos, THIS WILL ENCOURAGE AN INCREASE IN THE SURVIVAL RATE OF WILD NATIVE OYSTERS...

By aiming to put more than a million spat (baby native oysters) back in to the Fal Estuary every year we will be "putting more on than are taken off for relaying and consumption". 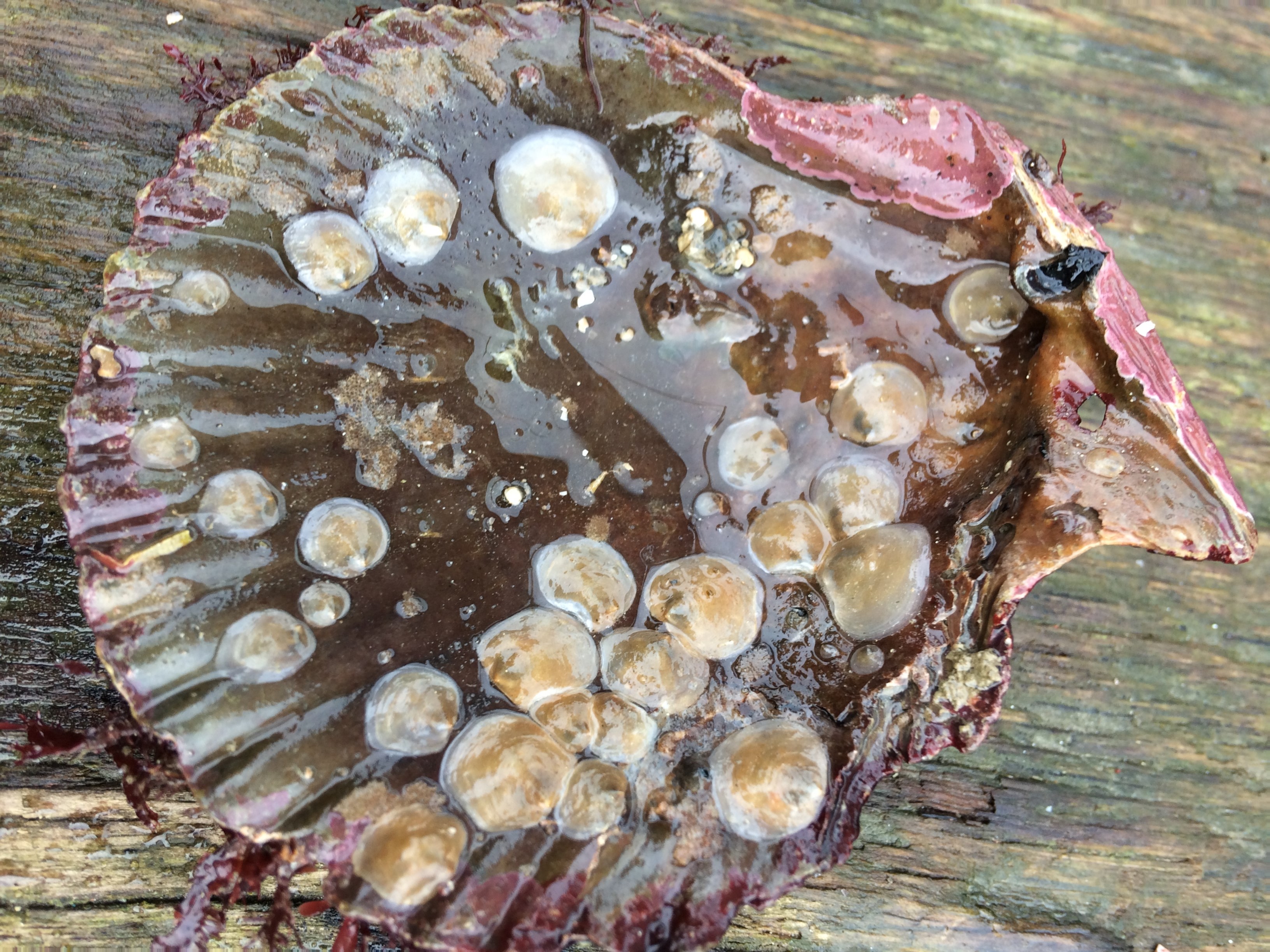 The project has very achievable expectations of a 1% survival rate, it is well understood in the USA that a 30%-60% survival rate can be achieved with hatchery born and nursery managed stocks. Also when mature oysters are stored at a density with many male & female oysters they will all help to trigger male oysters, when fertilized with billions of eggs created in the female shell they release millions of larvae in to their wild natural habitat, the Fal Estuary. 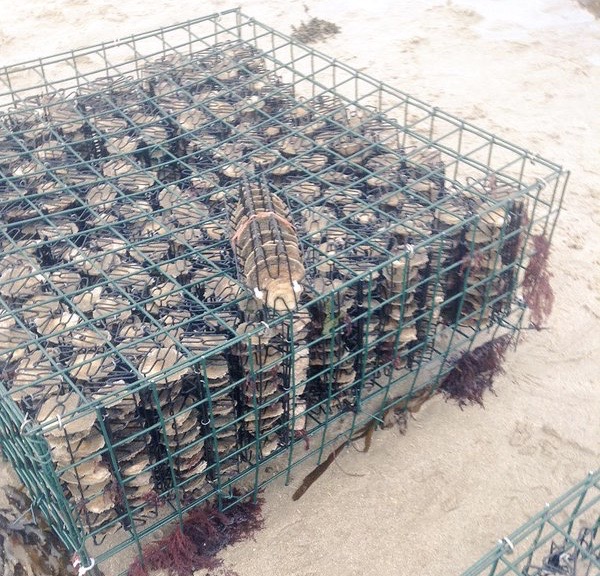 Sign up to our Mailchimp Newsletter by clicking here

WHY IS THIS PROJECT SO IMPORTANT?

The Native Oyster Restoration Alliance (NORA) and the Berlin Oyster Recommendation: “bringing back a key ecosystem engineer by developing and supporting best practice in Europe” Bernadette Pogoda et al"Recommendations: Produce sufficient oysters for restoration of oyster reefsBackground: Sufficient seed oyster supply is a key limiting factor for native oyster restoration projects in Europe. Translocation between sites of seed oysters or any other size classes from wild beds should be discouraged to avoid increasing the pressure on still existing wild beds and reduce the risk of spreading invasive species and disease.Recommendation: Action should be undertaken to support existing hatcheries, spatting ponds and spat collector techniques and to establish new hatcheries and spatting ponds for the production of robust and genetically diverse Ostrea edulis seed. Brood stock sanctuaries should be established and used for local reinforcements."

Historically, about 100 years ago, some 200 sail and oar vessels landed 800 tonnes from the same 1100 hectares that is now managed under the Fal Fishery Regulatory Order 2016. Stocks have recovered and maybe the offspring’s have become more resilient, but in the past few decades landings have peaked at about 100 tonnes between a few dozen or so vessels seen fishing on a daily basis. 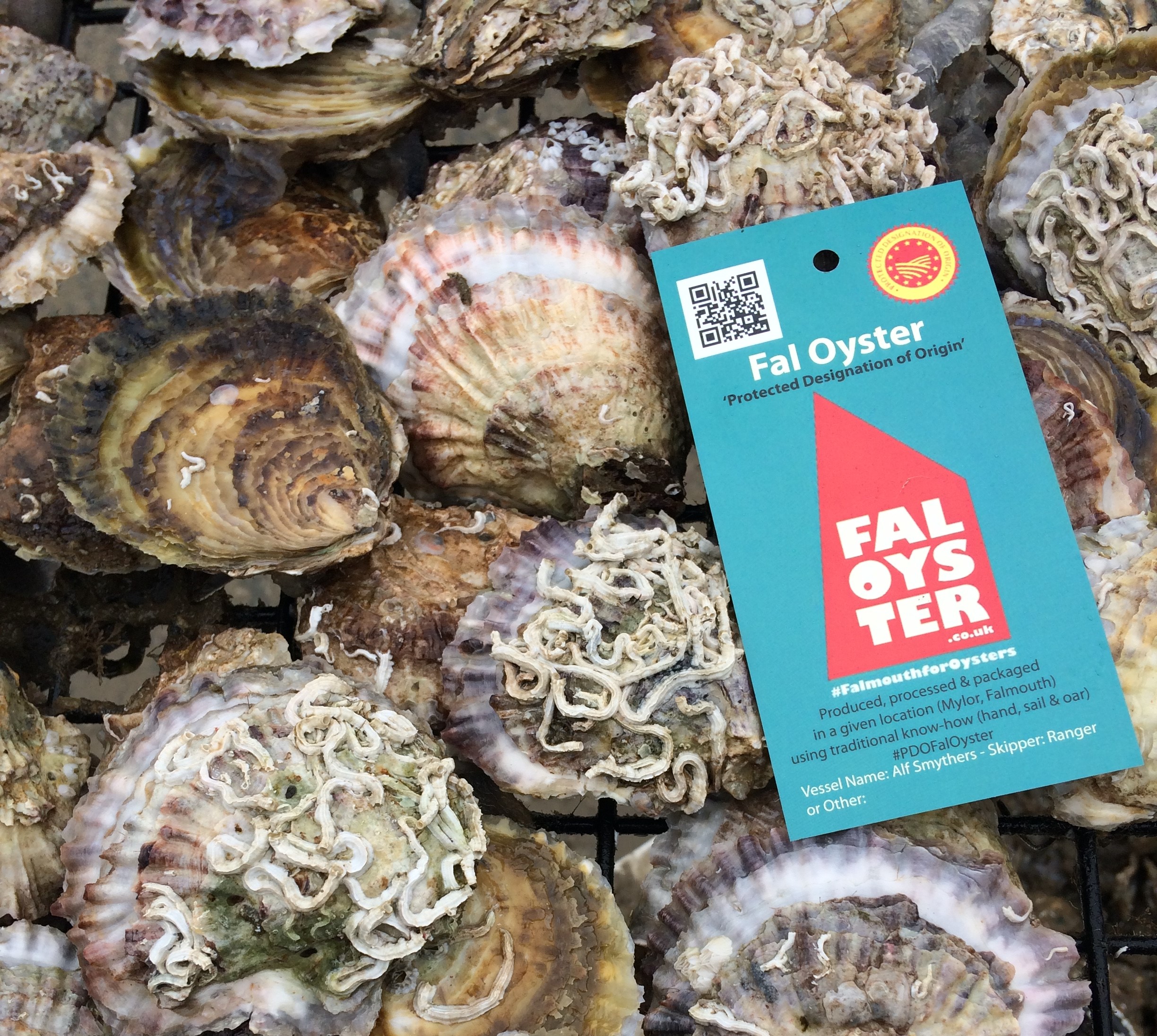 In 2019-20 season it is estimated that less than 20 tonnes will be harvested from the dozen or so sail and oar vessels, possibly due to the market no longer wanting to relay juveniles and possibly because some vessels are targeting other species. 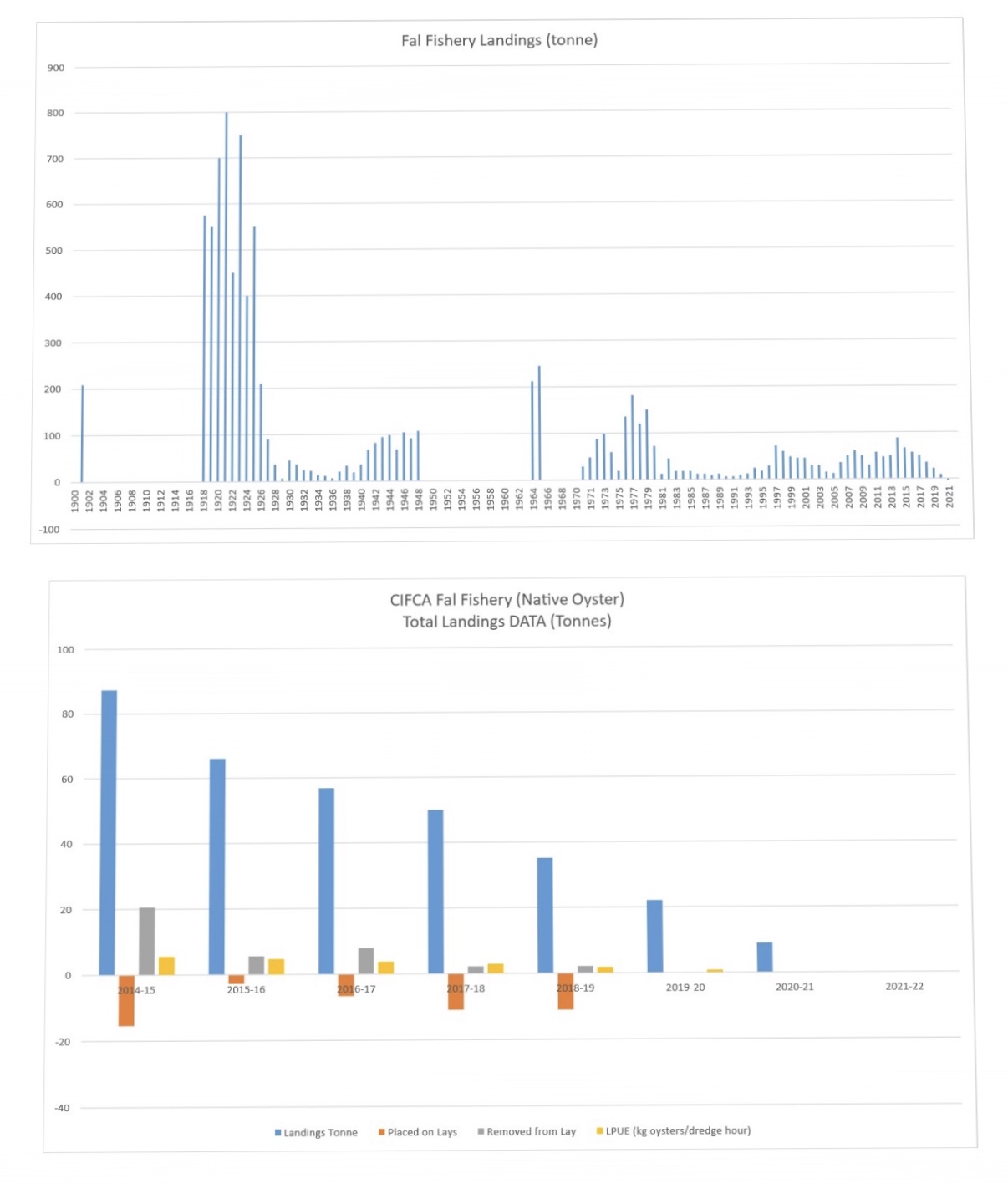 Lower Chart shows 'Actual Fishery Landings' blue columns 1-5 and 'Trending Estimated Landings' blue columns 6-7... so given the trends the 2020-21 season could be last for the sailing fleet and at what point will the biomass tipping point never recover?... The long term problem with fishing out all the 2-3yr old juveniles, is they barely reach maturity (where the take one leave but more than one theory should exist) in their own natural habitat, so its an ever decreasing biomass. (“It’s been shown that systematic predation causes prey of smaller size” says Nathaniel Dominy of Dartmouth College in Hanover, New Hampshire) 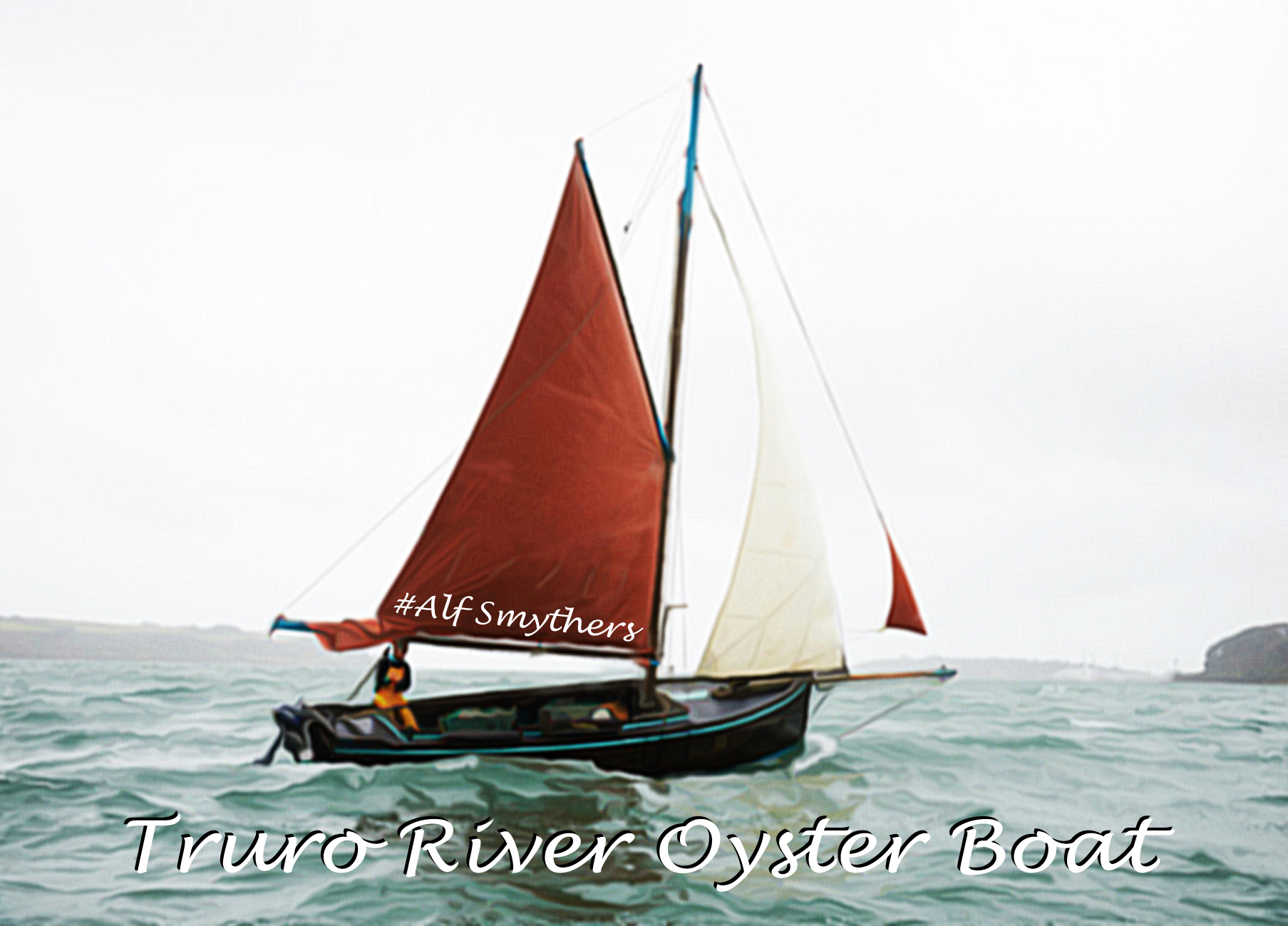 Heritage on the River Fal Fishery is believed to go back to the Phoenicians and Roman times and has been documented for more than 400 years – Sir Richard Carew wrote in 1602 of fishermen casting a “thick strong net fastened to three spills of iron and drawn to the boats stern, gathering whatsoever it meeteth lying in the bottom of the water, out of which when it taken up, they cull the oyster”. We need to provide for the future generations, not leave them with very few options to survive on...

HOW CAN YOU HELP?

Even a donation of just £10 (and by sharing your pledge with everyone you know so they might donate too) will help us reach our targets and show us, and many others, how much you care about our environment (planet), economy (pounds) and social community (people), then we can all play a part in restoring what was once a sustainable habitat and efficient industry.

Even greater pledges/donations or corporate sponsorship and becoming a Patron* will help us build the project quicker, so we can hopefully influence regulators and policy makers to listen to the future scientific evidence, that will reverse the decline in stocks, provide not just a sustainable food resource, but more importantly a healthier habitat and living wage for the future generations of children and grandchildren that will ultimately inherit our only planet. 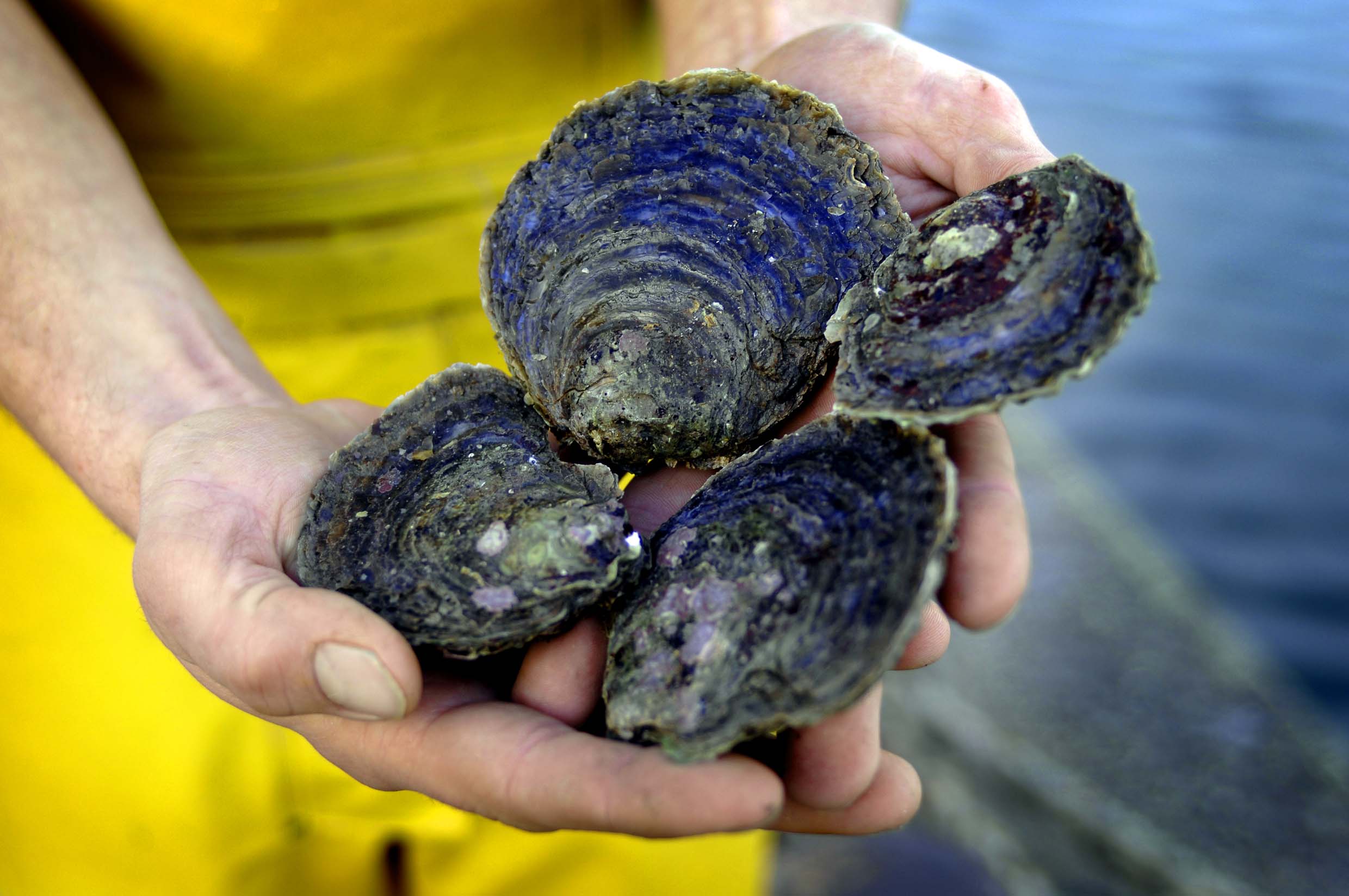 REWARDS FOR YOUR PLEDGES...

The merchandise rewards (T Shirts, Hats, Aprons etc - see reward options) will be hand screen printed (by CIC) and locally embroidered so you can show off your support to others, you will be contacted for sizes before we order!

Genuine Fal Oysters that have been gathered by hand, sail and oar in the 2019-20 season OR for later rewards in 2020-21 season when they have been through the new crowd funded hatchery and nursery program.

*BRONZE, SILVER & GOLD PATRONS will be invited to play a part in the whole process, from fishery trips to grading & processing oysters, from taking part in the hatchery process to helping relocate the spat to the nursery area... WE WILL ALSO INVITE YOU TO ONE OF OUR OYSTER SHUCKING MASTERCLASSES AND OFFER DISCOUNTS ON PRIVATE FUNCTIONS SUCH AS OUR WEDDING OYSTER BARS... If you wish to get further involved you may also be invited to become a subscriber, board member or director of the CIC.

THE POP UP GATHERING IS CANCELLED DUE TO COVID-19 GUIDELINES!

At the final weekend of this 8 week pitch Steve Skinner will be hosting our fundraiser finale to celebrate the 10th birthday of Pop Up Gatherings at the Skinners Brewery Tap known as the Old Ale House in Truro with Sushi Master Goemon from Dinings Harcourt Street London (W1H 4HH) with bands on Friday & Saturday evening and Rosie Crow headlining Sunday afternoons British Summer Time Special (Thursday 26th to Sunday 29th March 2020).

We hope to reach the 1st Spring Target (above) within a matter of weeks as the target secures the first summers hatchery program. The 2nd Summer Target (below) is to secure the aquaculture site for a year ahead, the 3rd Autumn Target (below) is required to secure the moorings and infrastructure to store the hatchery stock once it has settled and grown to a size that can be placed in to the wild nursery, the 4th huge Winter Target (below) is to purchase a grader, and year 2 rent, so scientific research data can be collected and used as evidence to encourage better fishery regulations, therefore prevent the overfishing of juveniles you have helped us to create.

WE CANNOT CONTINUE TO TAKE FROM THE ENVIRONMENT WITHOUT PUTTING SOMETHING BACK, AND WE CANNOT KICK START A HATCHERY PROGRAM WITHOUT SUPPORT AND FUNDING FROM YOU, THE CROWD!

We may follow this pitch with other crowdfunding pitches if we don't reach our stretch targets.So please donate and spread the word to your own friends and families. 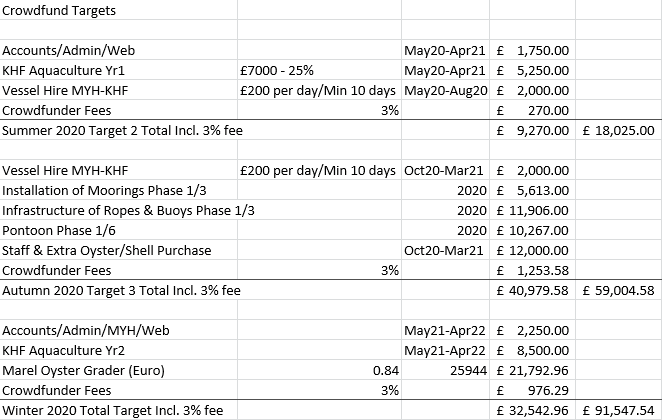 In the future we plan to fund scientific research of best practices in sustainable aquaculture, help responsibly manage hatchery, nursery & fishery stocks and support markets for a new generation of skippers & crew.

Then, when we know oysters have left more than we gather, a maximum sustainable yield of 70-115g Cornish Native Oysters will be gathered and only when depurated by verified Aquaculture Production Businesses, do they become prestigious PDO Fal Oysters with real provenance. 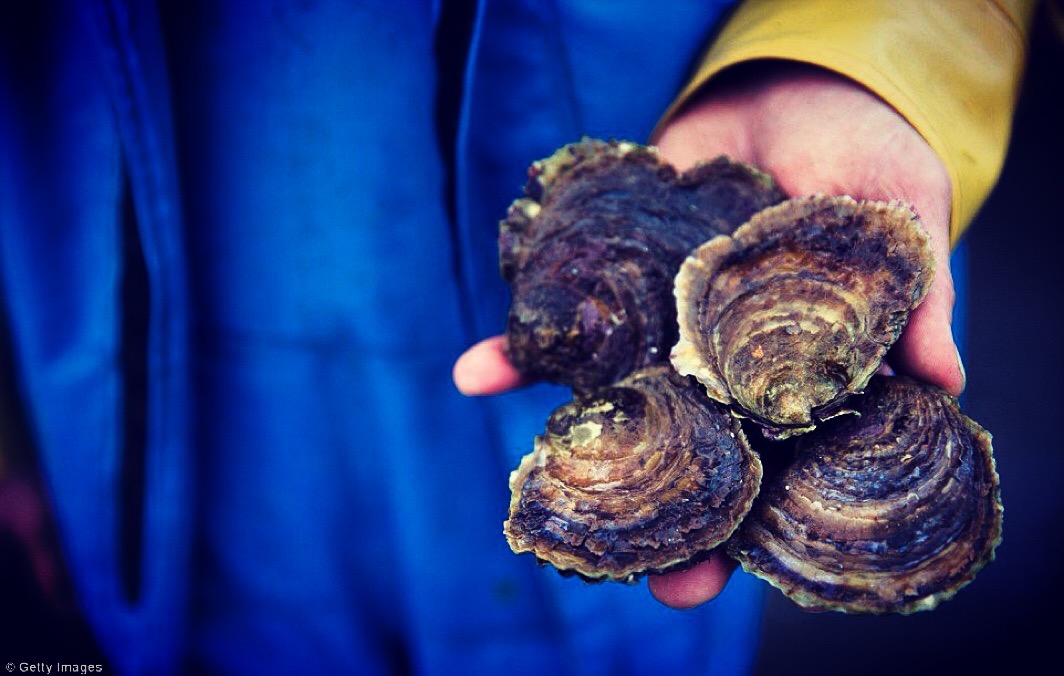 The Fal Fishery Cooperative CIC is a ‘not for profit’ organisation, but like all other charities and community interest companies it has to cover overhead costs of administration, rent, research, staff and stock with or without grants/funding, it also has to build itself towards being a fair employer and sustainable habitat manager for the years, decades and centuries to come. 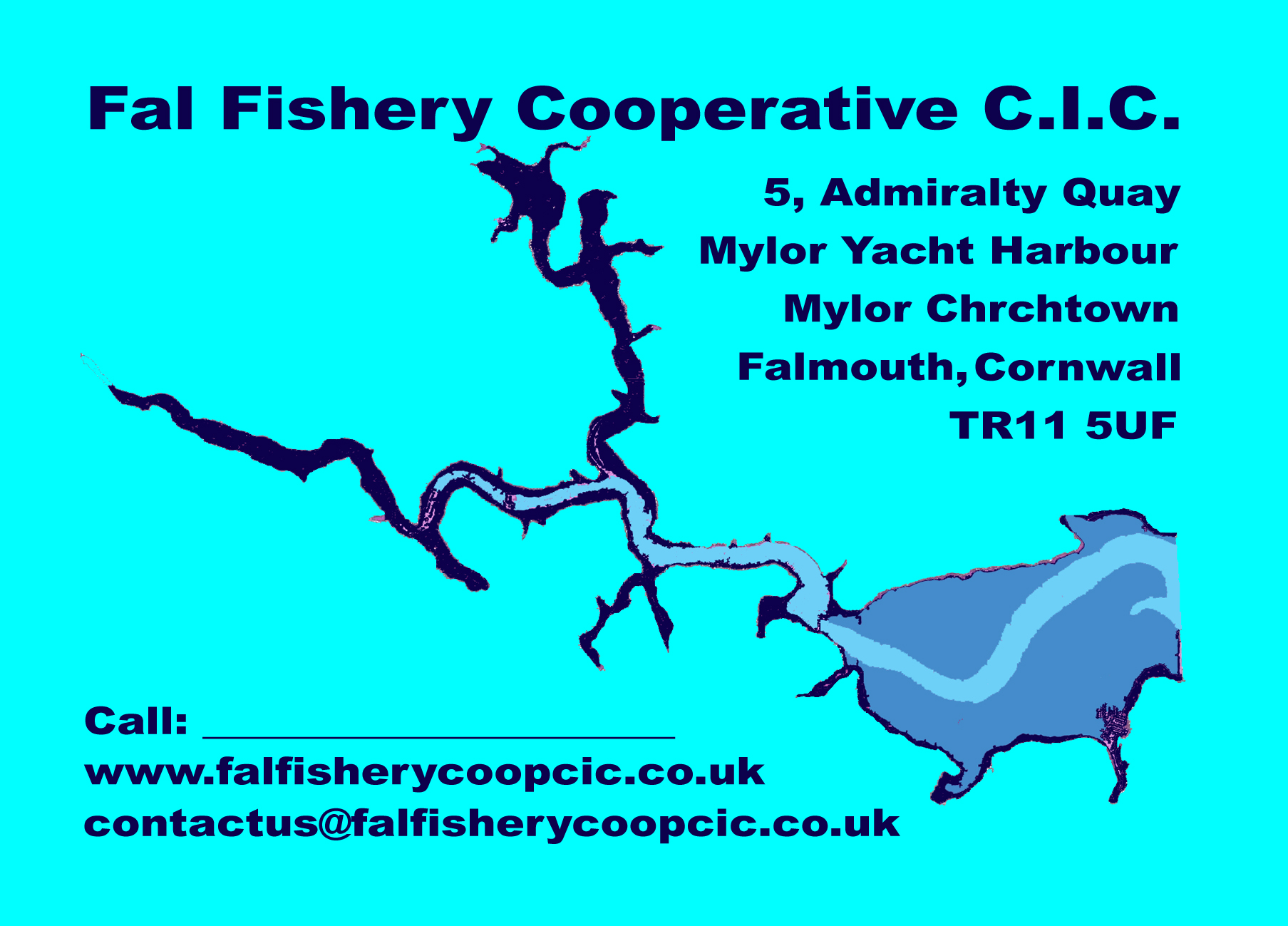 Sign up to our Mailchimp Newsletter by clicking here

A HUGE THANK YOU FOR TAKING THE TIME TO READ THIS AND WE HOPE #SavingESTER MAKES SENSE!

Stay informed with the BLOG and sign up to Mailchimp Newsletter Posted on April 04, 2020